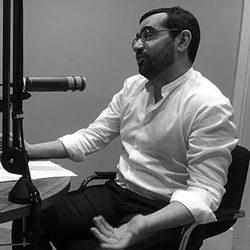 Emile Hokayem is the Senior Fellow for Middle East Security at the International Institute for Strategic Studies based out of its Middle East office in Manama, Bahrain. He is the author of Syria’s Uprising and the Fracturing of the Levant, published by the IISS and Routledge in June 2013, and the co-editor of Middle Eastern Security, the US Pivot and the Rise of ISIS, published by the IISS and Routledge in January 2015. He regularly provides analysis on Middle East affairs to governments, corporations and the media. His commentary has featured in The New York Times, The Financial Times, The Economist, AlHayat, Asharq Al-Awsat, Foreign Policy, Le Monde, The Wall Street Journal, The Washington Post, the BBC, NPR and other outlets.

Prior to joining the Institute, he was the Political Editor and international affairs columnist of the Abu Dhabi-based English-language newspaper The National.

From 2004 to 2008, he served as a fellow at the Stimson Center’s Southwest Asia/Gulf program in Washington DC, researching strategic, security and political issues in the Gulf and the Levant.

Emile has written extensively on Iran-GCC relations, regional security in the Gulf and Levant security. He has testified in front of the US Senate Foreign Relations Committee on Syria and Lebanon and spoken on Gulf affairs in front of various government and non-government audiences.

Emile earned his Master of Science in Foreign Service from Georgetown University, where he focused on international security, US foreign policy and the Middle East. He also served as editor-in-chief of the Georgetown Journal of International Affairs, the school’s academic publication. He has worked as an independent consultant on Middle East issues, including political and economic affairs. He holds degrees in economics and finance from the University of Paris-Dauphine. He is fluent in English, French and Arabic.